The Tales Parents Tell Their Children

Wes Craven’s film speaks on many levels. But I can’t help but think as I write this that it also served as a warning about the dangers of getting into cars and going with strangers. A cautionary tale echoed through Nancy’s words: “whatever you do, don’t fall sleep.” Which mirrored my parents’ and teachers’ warnings: “don’t talk to strangers.”

The 80s in the UK was an era of an adult society still feeling the rippling affects of the Moors Murders in the 1960s. The dangers of going off with strangers were further installed in children from regularly televised government warnings.

In their way they were installing fear into our innocent minds – the kind fear that in its rational form (a baser instinct) is there to protect us.

Fictional character Freddy Krueger was a child killer – a real life predator – before he was a demon and I guess this is why he tapped into that fear already installed in my psyche.

When I first saw A Nightmare on Elm Street I didn’t just see the first one in the series. No. My cousin had the first five films and when we went to stay with them one summer (it’s gotta be 1989 by now so I’d be 13 years old) we watched all five films. Back to back in one day while the parents were out. Freddy had dug his claws in and I was hooked!

An American Werewolf in London

Previous visits to the rellies when I was younger included a viewing of an American Werewolf in London. It was, again, the dream sequence where the zombie soldiers storm the family’s holiday home that freaked me out. The bulging eyes. That skin. And those teeth.

Recently there’s been talk of a remake. But for me, the combination of David Naughton’s performance as David Kessler and the special effects used in this film for the werewolf transformation scene are one of the best cinematic visual pieces of all time.

Watching the sequence you really get a sense of the pain and terror David experiences as a result of the flesh stretching and tearing and reforming across rapidly breaking bones snapping into place and changing the shape of his entire body. Let’s hope the remake sticks to those practical effects and not CGI. Or at least a combination of the two.

It wasn’t just the visual and sound effect aspects of storytelling that sent shivers up and down my spine. The late night Hammer Horror re-runs had plenty of those, but it was crisp, eloquent tones of actors like Peter Cushing and Christopher Lee.

It mattered not whether they were the hero or villain – the protagonist would always convey the urgency and horror of their discoveries; the gleeful antagonist savouring his triumps with machiavellian delectation. And then there was Vincent Price.

Although his works are far too plenty to mention indepth here, it is worth mentioning that contrary to a common belief he was never in a Hammer Horror. Something I learned recently.

But like his peers he leant his voice to many horrror story recordings and one particular pop record back in 1982. His voice on that recording would haunt me for years and would often send me running to hide behind the locked door of the bathroom. At least until the record was over. Why I ran to the safety of the bathroom I’ll never know. Seeing as I already feared Jaws rearing his ugly head up through the toilet bowl (see Nightmare & Scary Tales – Part One).

What did Captain Howdy say?

Speaking of scary voices and and hiding in bathrooms this brings me onto my next subject. I may have been scared as a child to go to the toilet thanks to Jaws. But fear can get us at any time and at any age.

“We’re going to get you,” dad would often tease us with his impression of a deadite from the Evil Dead, which would send me running in fits of laughter to hide behind the sofa or up to my bedroom. But it was his story of when he took my mum to see The Exorcist when they’re were 19 that always sticks in mind. He’d recount the film was so terrifying and that mum was so scared by it that he had to escort her to their outside toilet at night (don’t forget this was the 70s) every time she needed to use the loo.

Again another innocent, but entertaining tale that transcended from one generation to the other and into the mind of a child. Who or what was The Exorcist?

And still, even by today’s standards and voice altering filters, the voice of Pazazu the demon is one of the scariest on film by a long shot.

It was only in recent years I rediscovered a real passion for reading that I had when I was a kid. And particularly for dark fantasy and horror. I’d discovered a few years back The Exorcist was based on a book. And it became of my favourite books of all time. If you haven’t read it yet, I highly recommend it. 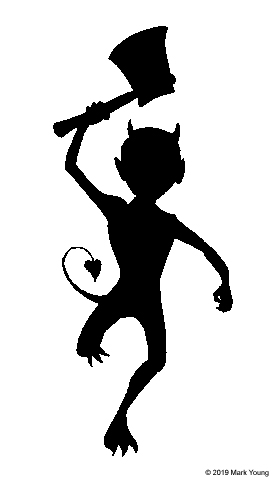 James Herbert and Stephen King not only adorned my parents bookshelves, but they often entered conversation when they and friends discussed the books they’d been reading.

Rats was James’ first and most popular title – one I read for the first time at 16 for a school summer reading project.

And there were countless Stephen Kings. But I do recall them speaking about how some of the endings from the Master of Horror would often let the books down. A sentiment I stumble across the internet in recent times.

Needless to say, regardless of how you feel about his endings, Stephen King’s characterisations, world building and iconic horror villains make his books part of the staple diet – especially if you are new to the dark fantasy and horror genre like I was.

‘It’ has to be my favourite. I read it a few years back ahead of the 2017 movie. The use of stories within a story to world-build and get the reader to grasp the reach and power of this demonic force reaping terror throughout Maine – is not only genious, but it also blends in the horrors some of us face in the real world. Making the characters we’ve known to love and hate all the more relatable and engaging.

I loved ‘It: Chapter One’. I missed Tim Curry’s Pennywise the first time around. And I thought Bill Skarsgaard’s take on the character put him up there with the best horror icons of all time. Here’s hoping Chapter Two is as good as the first. And as the Easter eggs from Chapter One suggests – I hope they make that ending work.

One helluva a rollercoaster ride

I guess that’s how horror came into my life. The why? I can only guess. I’ve always likened my love of horror to the highs and the lows, the twists and the turns (and, of course, those screams) of a rollercoaster ride. It’s the exhilaration. Providing the book/film is really well-executed (again sorry for the pun – I promise this one was unintentional).

When your stomach churns and your heart beats faster, don’t you feel that little bit more alive? Like me, do you still get invested in the hero’s/heroine’s journey and liken it to your own? Hell yeah! Don’t we all?

A wild stab in the dark

I could hazard a guess and say those are just some of the reasons why I turned my hand to writing horror. Remember when I said before when there are those that like to scare and those who like to be scared?

Now I’m at a time in my life where I’ve faced my demons, turned my back on them just like Nancy did with Freddy. And I guess writing horror is my way of exorcising those demons once and for all. It’s my way of contributing to the wider world and this mysterious thing called life. Providing escapism and that thrill of the rollercoaster ride for all those who dare to board the train.

Mark Young’s The Heartbreaker: 13 Dark Fantasy & Horror Stories is now available worldwide from Amazon.co.uk and Amazon.com. for Kindle, Kindle Unlimited and in Paperback. But be warned: there are no height restrictions on this ride.

One thought on “Nightmares and Scary Tales – Part Three”